Should you medicate your child for ADHD? That’s the big question. I want to tell you about my experience and share the decision we made on whether or not we should medicate our son for his ADHD.

Before I get started, I want to remind you that I am not a doctor. I have no medical background. I am just a mom with a child with ADHD that wants to share my experience with medicating our child for ADHD.

First, I know that medicating your child with ADHD is controversial. I only want to share what we did as a family and our experiences.

We met with an ADHD specialist once my son was diagnosed with ADHD. We talked in-depth about what the best action for our son would be. Our specialist helped inform us about the different types of medication and the effects and side effects of the medicine. He also educated us on what we could continue to expect if we chose not to medicate our son. The specialist left it entirely up to us as parents, and In the end, we decided the best path for us was to medicate our son.

We thought long and hard about what to do. We did our research at home. We wanted to give our son the best chance, both at school and at home. For us, that best chance was to medicate him. Understand, there wasn’t anything we viewed as negative about our son. He is brilliant, has a curious mind, and would often hyper-focus on various things. At school, he struggled, and it was difficult for him to make it through an entire day in class. His mind would start to wander, and he’d quickly lose track of what he needed to be doing. He also struggled to remember assignments and homework that needed to be done. We knew that medication would help our son in these things, and in my mind, if there was something that could help my son be successful, then I was going to do it.

My son started taking medication for his ADHD in the second grade. He began with a low-dose extended-release tablet. We chose this strategy so that he wouldn’t have to retake his medicine during the day at school. It allowed him to get through his day at school and continue being able to focus until the early/late evening, for about 10-12 hours in total. It took us about three or four different medicines to find one that fit him. We found one that worked and one that he said helped him focus and that he felt comfortable taking. We relied a lot on his opinion on the medicine too. We would often ask him how he felt when he was on the medication and ask whether or not he could tell the difference after taking the medication.

He was on this lower dose extended-release medication for all of his elementary schooling and part of middle schooling. Once he returned to school after Covid, we changed the dose to be higher. At that time, it felt like the medication wasn’t lasting as long, and he couldn’t focus as clearly as he had been before. He has now been on a higher dose of medicine for two years.

How Did We Know to Change the Dose?

Allowing Our Son to Choose When to Take Medication

My son can choose when he wants to take his medication. He can decide not to take it on the weekends or in the summer, often choosing not to. He always takes it if he has school or something significant and needs to be able to focus, such as going to a marching band competition. He’s in the drumline and loves it!

I can tell the days that he doesn’t take his medicine. He is more unorganized when not medicated. He can’t follow directions easily. He also can be very, very talkative. He can only stay focused for short about of time. He is much calmer when he is on it, and he can stay focused for more extended periods. He can follow directions. It helps him to be able to get his homework done.

Our Son’s Side Effects From the Medication

As everyone knows, often, medicine has side effects. They can be minor, as often is the case with ADHD, but with our son, there are two side effects that we watch closely.

The first side effect is that my son doesn’t have much appetite when he is on his medication. His appetite is the most significant concern for us with his medication. Our concern doubles because of his tactile defensiveness, which ends up being a huge problem. If you have read my posts about his tactile defensiveness (A Mother’s Experience With Tactile Defensiveness), you know that he already struggles with eating. Then to add to it, he doesn’t have an appetite, which makes it even worse. We constantly have to force him to eat. We also always watch his weight to make sure he is gaining weight. When he maintains or starts to lose weight, we bring it up with the doctor to discuss if we need to change his medication.

The second side effect is that my son has difficulty falling asleep at night. It is hard for him to calm down enough to fall asleep, and because of this, he ends up staying up later than he should. Some nights, he’ll watch TV to settle down, and then he’ll stay up reading a book. But staying up late does make it hard for him to get up and go in the morning.

Should you medicate your child for ADHD? From one parent to another, you need to do what is best for you and your child. It doesn’t matter what other people think. If you decide that having your child on medication works, that is great. Suppose you decide that you would instead not put them on medication and would rather supplement with something else. That is great too. As long as you do what is best for you and your child, that is the correct answer. Please don’t worry about what other people think or say. Only you know what is best for you! For us, it was to medicate, and it has proven helpful and has had a significant positive impact on our son both at school and at home. We have seen mostly positive from him taking medication that has shown us we’ve made the right decision for him. 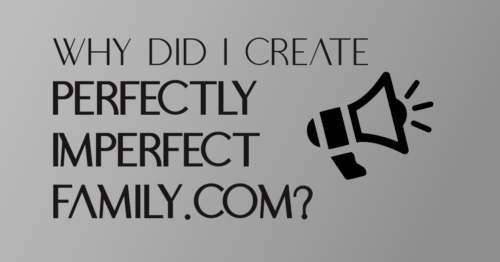 Why Did I Create Perfectly Imperfect Family.com?

Learning to Walk With Tactile Defensiveness